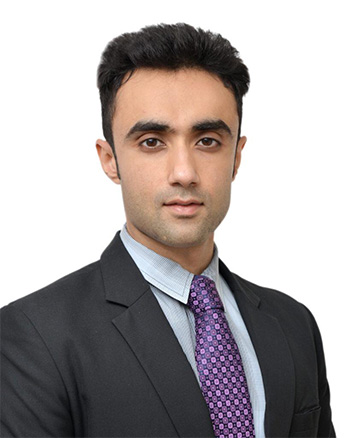 Arush Khanna (MCIArb, MMIArb) is an Advocate & Legal Consultant enrolled with the Bar Council of Delhi. He started his practice in 2012 after graduating from the Symbiosis Law School, Pune and has also done his Masters (Business Laws) from the National Law School of India University, Bangalore.

After having worked in M/s Karanjawala & Co. and in the chambers Mr. Sanjeev Anand, Senior Advocate at the Delhi High Court, Arush started his independent counsel and advisory practice in New Delhi before co-founding Numen Law Offices in 2019. An emerging firm which has already been recognized and awarded by prestigious associations such as the India Business Law Journal, Asian Legal Business, Business World and Legal Era.

Arush specializes in Commercial Disputes in the field of Arbitration, Insolvency, Real Estate, Projects & Infrastructure. He has advised and represented several fortune 100, multinational as well top Indian companies before several courts and tribunals across India.

Arush is deeply rooted in legal academia and writing. He has over 25 publications for international and national law journals. He is regularly invited to write columns by the Indian Express. Arush is also a regular lecturer and is invited to speak by several law schools on topics relating to commercial law.

Some noteworthy accomplishments of Arush Khanna include: